Start a Wiki
Nibbles is a main character in Fossil Fighters: Frontier and a Vivosaur that can be used in Fossil Battles. The player first meets Nibbles when Nate takes him/her into a room inside Professor Little's lab and awakens him which results in Nibbles running off into the Fossil Park where they have to chase him.

After saving Nibbles from a rogue Gorgo, Nibbles forms a small bond with the Player and when the same Gorgo traps and corners you, Nibbles awakens again of his own choice and rushes to save them by transforming and driving the Rogue vivosaur away.

As a result of Nibbles coming to aid the Player, Captain Stryker believes they have a bond and makes Nibbles their partner and they ten give him the bandanna he always wears. Despite his small size Nibbles isn't any ordinary Vivosaur, beneath his violent temperament hides a secret that may be the reason why Captain Stryker gave him to the Player.

At first, Nibbles is a very violent and short-tempered Vivosaur, as shown by how he bit Nate's butt right after he made a joke about it. However, after being saved by the player, he forms a bond with him/her and when realizing he/she is in trouble, wakes up of his own will to help them. After becoming the player's Vivosaur, he slowly loses his violent tendencies but still has his short-temper.

Aside from his normal default form, Nibbles also possesses a battle form for use in Fossil Battles, which evolves and changes throughout the game. His original battle form, Nibblesaurus, is a small, raptor-esque Vivosaur that shares most of its physical traits with Nibbles' standard form. His second form, the Munchasaurus, resembles a much larger theropod, and features a single large, yellow horn. Chompsaurus is Nibbles' third battle form, in which he takes on the appearance of a therizinosaur, with elongated claws on its arms. His final battle form, the Crimson Ravager, takes on a much larger appearance, not resembling any particular type of dinosaur, but still having the basic traits of Nibbles.

Names in other languages 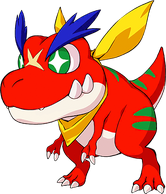 Add a photo to this gallery
Retrieved from "https://fossilfighters.fandom.com/wiki/Nibbles?oldid=75002"
Community content is available under CC-BY-SA unless otherwise noted.