For the article about the people who use vivosaurs to battle, see Fossil Fighter.

Fossil Fighters (ぼくらはカセキホリダー We Are Fossil Diggers) is a video game developed by Red Entertainment for the Nintendo DS. It follows the story of the Hero, a young boy, as he comes to Vivosaur Island, becomes a Fossil Fighter, and rises up the Fighter Ranks, eventually becoming a Master Fighter. However, his path is blocked by a mysterious group known as the BB Bandits, who are revealed to be commanded by a bigger, more dangerous force...

DIG AND DUEL! Welcome to Vivosaur Island, where dinosaurs revived from ancient fossils fight in thrilling battles. In your adventures as a Fossil Fighter, you'll delve into ancient ruins, explore sunken pirate ships, and uncover secrets that will shake the planet to its core!

Fossil Fighters received average to somewhat favorable reviews. IGN rated it a 5.9/10 "Mediocre," while Japanese gaming magazine Famitsu rated it a 32/40. Reviewers praised the game for its compelling cleaning feature and fun, lightly strategic battle system, but criticized its simple graphics and soundtrack. Many compared it to the Pokémon games, though they noted that Fossil Fighters lacked some of that series' positive features, specifically citing the game's limited multiplayer capabilities. 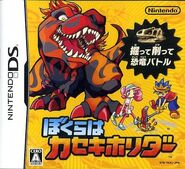 Japanese Fossil Fighters cover art.
Add a photo to this gallery
Retrieved from "https://fossilfighters.fandom.com/wiki/Fossil_Fighters?oldid=75298"
Community content is available under CC-BY-SA unless otherwise noted.